IMSA Michelin Pilot Challenge @ Daytona. The second season of the TCR class in the IMSA Challenge began with an exciting four-hour race at Daytona that provided eight different leaders and plenty of overtaking and clashing. Eventually the Honda Civic cars finished 1-2. Alex Popow was impressive in his red Alfa Romeo Giulietta, as he led for the first 30 minutes of the race.
The last hour began with the top-four drivers covered by the same second: Lamb, Pombo, Vance and Popow. After a full-course-yellow, Lamb pitted for fuel, Pombo took the lead and Popow overtook Vance for second. The fight for the win was between the Honda cars of Lamb and O’Gorman and Popow’s Alfa. With 35 minutes left the Alfa went back into the first place, but then retired in a cloud of smoke.
The second round of the IMSA Michelin Challenge will take place at Sebring on 15 March. 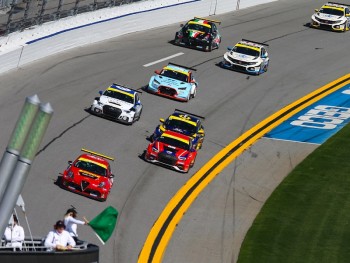 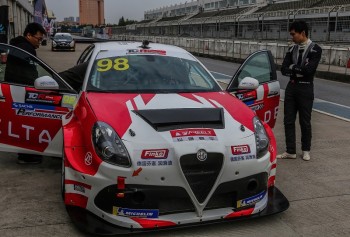 WTCR 2019
Ma Qing Hua has been the latest driver to join the WTCR field for the 2019 season.
Ma will join Team Mulsanne as Kevin Ceccon’s teammate. The 31-year-old Chinese is one of the most experienced Touring Car drivers in Asia; after clinching the 2011 CTCC title and winning two WTCC races between 2014 and 2015, he had the opportunity to get used to TCR cars in the two latest seasons. He competed in the 2018 WTCR Asian events in a Honda Civic, tested the Romeo Ferraris-built Alfa Romeo Giulietta at Vallelunga and eventually won the TCR China finale at Guangdong in a Giulietta run by Freely Racing.
“I really appreciate the fact that Team Mulsanne and Romeo Ferraris chose the Chinese New Year to announce our partnership. I already drove the Giulietta and the feeling was good from the beginning. I think it has a big potential and the team is working hard to improve it in order to be competitive from the start of the season. This will be the second time for me in an Italian team after 2005, so it will be nice to relive the typically warm atmosphere during the year,” said Ma.

TCR Australia 2019
Garry Rogers Motorsport is the latest high-profile team to commit to TCR Australia, securing two Alfa Romeo Giulietta Veloce cars that are currently under construction at Romeo Ferraris’ race shop in Milan.
“We have been looking with interest in the TCR Series from a far, at both the local and international competition, and we have been really impressed,” said team principal Barry Rogers. “We are in motorsport business, and we consider anything where we feel there is value for our business and the sport, and there’s no doubt that TCR competition is a cost-effective way to compete. Myself and head engineer Richard Hollway went to Europe to visit a number of TCR manufacturers, and we were particularly impressed with the Romeo Ferraris team. The way they are in business is very similar to us – family run business, strong ties with the car maker. We raced an Alfa Romeo 155 in the 1995 Australian Super Touring Championship for Steven Richards, so there’s something romantic about us having done this deal with Romeo Ferraris. That was our first year in the championship with Steven Richards and it was a great car.”
SCARB no 00575
Alfa Romeo Registro Miniatura, since 1992.
http://alfaromeominiatura.nl
Alfa GT 1.9 JTDm QV Q2 2009 rosso
Alfa Giulietta Sprint 1.4 TCT 2016 rosso
*driving Alfa Romeo since 1975

The new Alfa Romeo Giulietta Veloce is ready to impress
A lot of work has been done at Romeo Ferraris to develop a new Alfa Romeo Giulietta for TCR competition. The new-born car, named
Giulietta Veloce, differs in a number of parts from the model that has been raced so far. The whole framework has been lightened, the front bumper-splitter group and rear wing’s mounting have been redesigned to reduce drag, the weight distribution has been optimized.
Operations manager Michela Cerruti explained: “It’s a brand new project and we haven’t had enough track time to compare the two models. But we have built the Veloce with the aim of improving performance. The outside look is still quite the same, but the main changes are inside; the lighter framework and new weight distribution have been conceived to make the car more driveable and agile, improving the fields where we were struggling.”
So far, 14 Giulietta TCR have been sold to customer teams in Europe, USA, Australia and Asia.
“It is still a competitive car, with the potential to achieve brilliant results,” Cerruti said. “We will keep on providing on-site technical support to our customers, just like we are currently doing in North America. We have already received orders for the Veloce, the first one from Australia, but we don’t make predictions on future sales. However, we are confident that in 2019 the new model will be racing in a minimum of two TCR series other than WTCR.”
Photos: TCR-Jordi Rierola 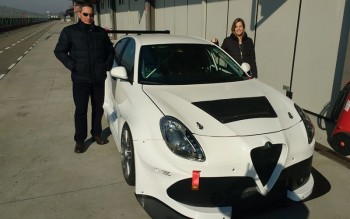 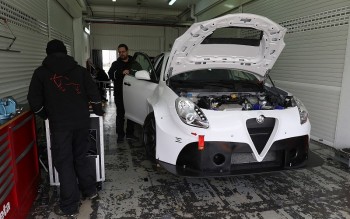 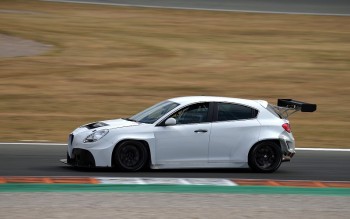 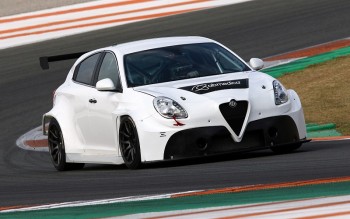 After a strong inaugural year under the name of Pirelli World Challenge, the North American sprint series has been rebranded
TC America and returns with the opening event at Austin’s Circuit of the Americas.
Twelve entries make up the TCR with five brands represented: Alfa Romeo, Audi, Honda, Hyundai, and Volkswagen.
Longtime sportscar Ferrari outfit Risi Competizione joins the series with James Walker who will be driving an Alfa Romeo Giulietta, as the team kicks-off their touring car programme.
James Walker's Risi Competizione Alfa Romeo Giulietta was the quickest car in the final part of the sunday race, advancing to fourth and setting the fastest lap. Walker was chasing Hurczyn, but eventually finished fourth by half-a-second. 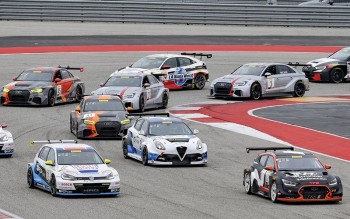 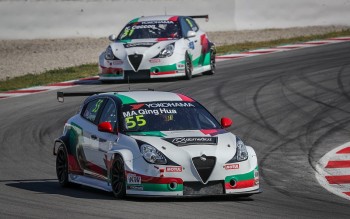 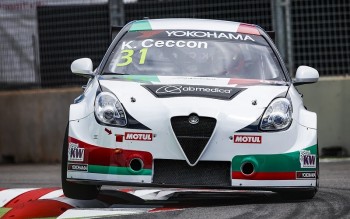 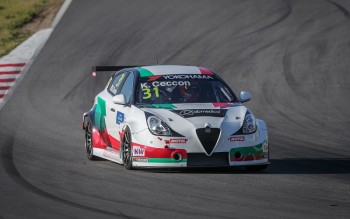 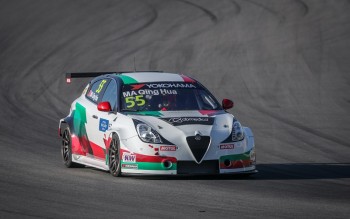 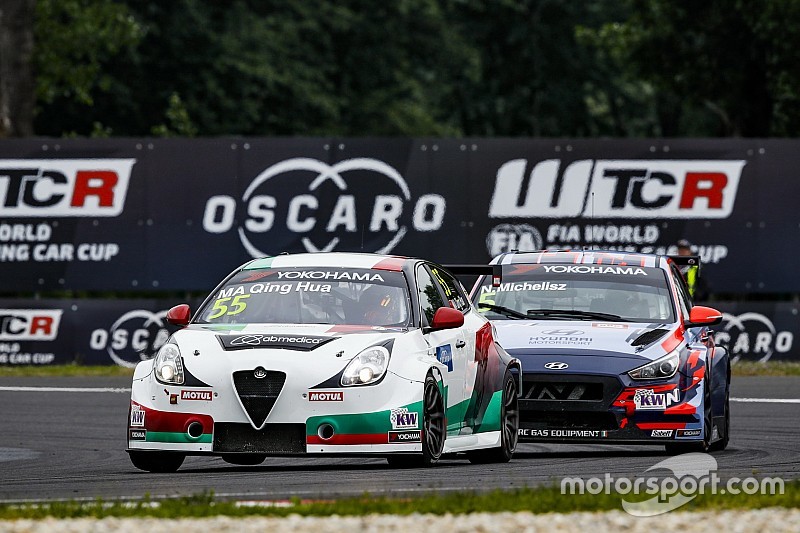 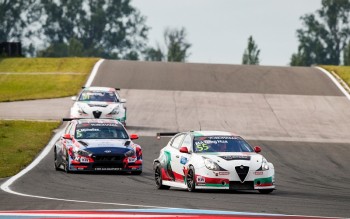 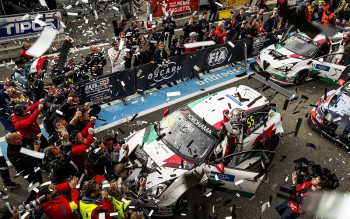 First victory in TCR Australia of the Alfa Romeo Giulietta Veloce TCR
The 2019 season of the Alfa Romeo Giulietta Veloce TCR by Romeo Ferraris enters into the thick with the first win in the TCR Australia, on the Phillip Island circuit. After two top-three wins in the inaugural round last month, Dylan O'Keeffe won, securing the pole position during the qualifiers and dominating the entire race ending with an over five seconds' lead on competitors.
Equipped with a 1742 cm3 straight-4 engine developing over 350 hp of power, the Giulietta TCR of the A. Seward Motorsport team is closing in on championship leader with 152 points, just six from the top. After the triumph of Team Mulsanne in the Slovakia Ring of the FIA WTCR, the one in Australia is the second international win of the gritty Alfa Romeo Giulietta Veloce TCR developed and built in Opera (Milan).
After its track debut in April 2016 and a subsequent period of development, the first successes were reaped in the TCR International Series just one year after its launch. In October 2018, the Romeo Ferraris scored a historic victory in the FIA WTCR World Touring Car Cup in Suzuka, Japan. Today, the car is giving fans a crescendo of thrills in the 2019 season, as always under the banner of Alfa Romeo.
"FCA press" 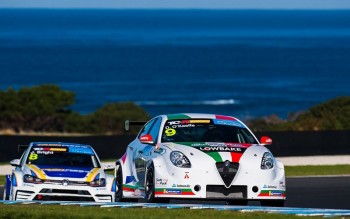 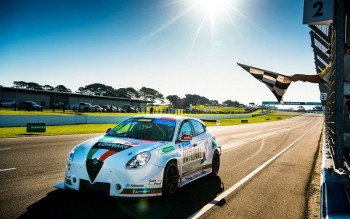