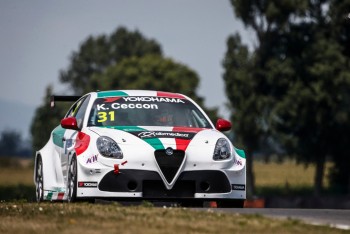 Ceccon to race at Vallelunga
The penultimate event of TCR Italy that takes places this weekend at Vallelunga will see Kevin Ceccon adding to an already impressive field.
Ceccon will race in a Team Mulsanne Alfa Romeo Giulietta. After having been confirmed for taking part in the final rounds of the WTCR, he will make his TCR Italy debut with the task of helping V-Action Racing Team's Luigi Ferrara in the title fight.
Michela Cerruti, Romeo Ferraris Operations Manager commented: “I am confident that Kevin and Gigi will be in a position to exploit the whole potential of our Alfa Romeo Giulietta TCR, and the Romeo Ferraris' staff will be at Vallelunga to give them full support. For Kevin, it will be useful to be back at the wheel of the car two months after his WTCR debut at the Slovakiaring, while Gigi Ferrara is ready to defend his title chances.”
The championship is led by Salvatore Tavano in the Cupra run by SEAT Motorsport Italia who has a margin of 32 points over his teammate Matteo Greco. Ferrara and Baldan are lying third and fourth with gaps of 40.5 and 54 points respectively when 88 are still on offer.
Live streaming at www.tcr-series.com and www.tcr-series.tv.
Saturday: TCR Italy, Race 1 - 15:10 CET
Sunday: TCR Italy, Race 2 - 11:25 CET
SCARB no 00575
Alfa Romeo Registro Miniatura, since 1992.
http://alfaromeominiatura.nl
Alfa GT 1.9 JTDm QV Q2 2009 rosso
Alfa Giulietta Sprint 1.4 TCT 2016 rosso
*driving Alfa Romeo since 1975

The Romeo Ferraris-built Alfa Romeo Giulietta TCR completed a two-day test at Vallelunga, where four drivers took turns at the wheel.
Kevin Ceccon who drove the Italian car in the WTCR and claimed one race win in Japan was joined by two other World Cup regulars: Tom Coronel and Ma Qing Hua. The quartet was completed by Jono Lester from New Zealand whose past racing experience ranged from formula cars to GTs, including the 2013 national Endurance title and a second place in the 2006 Lamborghini Super Trofeo Asia.

The occasion offered the Romeo Ferraris technical staff the opportunity to check a few small changes in the aerodynamics.
Coronel said: “I’ve been impressed by the engine of the car. I knew that was one of its strongest points, but from the inside is impressive how strong it is. I pushed the car to the limit to understand how it reacts and the feedback was very positive. Vallelunga is a good testing track, so it was a positive day for me.”
Ma Qing Hua added: “These have been two intense testing days. I had had the chance of making a few laps in the old spec car in China, but this year’s car is much better. I raced against it during the past season and was interesting see how competitive it could be!”
A delighted Lester stated: “This is such an amazing car! I had driven in Vallelunga a few years ago, so I knew the track and could focus 100% on understanding the car. I enjoyed it a lot! Team Mulsanne and the Romeo Ferraris staff helped me in getting used with the car as faster as I could. I definitely want to work to race it in WTCR next year.”
Ceccon concluded: “I missed the action for the last month after Macau, so it was good to be back at the wheel. The Romeo Ferraris’ staff called me to have a feedback on some new things that we have tested. Nothing for next year has been decided yet, but I’m sure we’ll have some news on it soon.” Photo: Romeo Ferraris 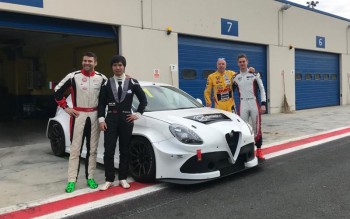 The Romeo Ferraris-built Alfa Romeo Giulietta TCR completed a two-day test at Vallelunga, where four drivers took turns at the wheel.
Kevin Ceccon who drove the Italian car in the WTCR and claimed one race win in Japan was joined by two other World Cup regulars: Tom Coronel and Ma Qing Hua.

TCR China @ Guangdong, last 2018 TCR China races:
The first race was dominated by Freely Racing's Ma Qing Hua who claimed the maiden victory in China for the Romeo Ferraris-built Alfa Romeo Giulietta. Ma pipped Wong at the start and never looked back, winning with a comfortable margin ahead of the Golf cars of Li Lin (Leo Racing) and Tian Li Ying (HE Racing).
Ma Qing Hua provided another show in the first part of the 60-minute Race 3, building a 25-second lead before handing the Giulietta to Xia Yi Li in the compulsory pit-stop. However, Xia beached the Italian car onto the gravel with 25 minutes left, handing a comfortable victory to Hui and Wong. Photo: TCR China

IMSA Michelin Pilot Challenge endurance 2019 USA, KMW and TMR to run an Alfa Romeo
KMW Motorsports and TMR Engineering have joined forces to run an Alfa Romeo Gulietta TCR in the IMSA Michelin Pilot Challenge; the car will be driven by Roy Block and Tim Lewis Jr.
“We are excited to have Tim and Roy representing our team in 2019,” said team principal Louis Milone. “This is a historic season as we are bringing Alfa Romeo to professional endurance racing in North America. I cannot imagine a more exciting season than the one ahead of us.”
Block and Lewis Jr. have put in over 1000km of testing each in the Gulietta built by Romeo Ferraris.
“It is fair to say that not many TCR teams have completed so many miles on the new Michelin tyres for 2019. That should certainly allow us to hit the ground running when the transporter doors open in a few weeks,” said KMW Motorsport's Kevin Wheeler.
The car is expected to appear at this weekend's test at Daytona.

The Alfa Romeo Giulietta entered by KMW Motorsport with TMR Engineering struggled to stay on the pace in the beginning, but in session 5 Roy Block (2:01.253) and Tim Lewis (2:01.293) were able to reduce the gap from the fastest car to 1.3 seconds. 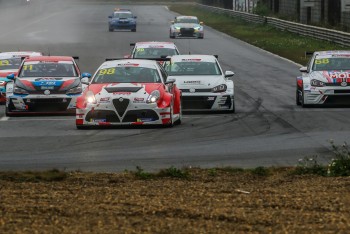 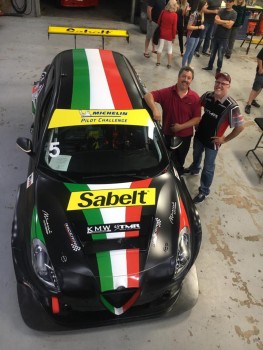 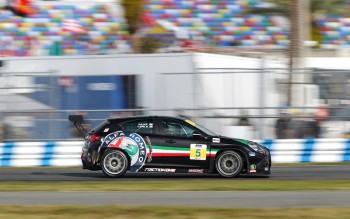 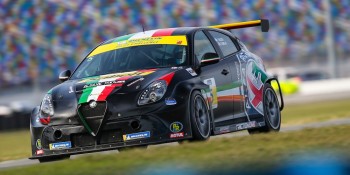 KMW Motorsports with TMR Engineering will field 2 Alfa Romeo Giulietta cars in the TCR class of the IMSA Michelin Pilot Challenge.
Both cars were at Daytona for the Roar Before the Rolex 24 test days, with Roy Block and Tim Lewis Jr. making laps. The driver lineup for the second (red) car will be revealed in the coming days.
“The level of support from the Romeo Ferraris engineering company has been overwhelming and I feel like we’re the full factory team,” said team manager Louis Milone. “They sent people and they’ve been great with getting us all the parts we need to make this thing happen.”
With so many new beginnings – team, car, drivers – Milone has learned to adjust his expectations and goals for the upcoming season. “I would like to be competitive in every race and be a contender. But it would be a great season if we finish every race and somewhere in the championship that’s respectful. The ultimate goal is to represent the brand well and look professional.”
Laatst gewijzigd door Alfa Romeo Miniatura Fer op wo jan 16, 2019 15:17, 2 keer totaal gewijzigd.
SCARB no 00575
Alfa Romeo Registro Miniatura, since 1992.
http://alfaromeominiatura.nl
Alfa GT 1.9 JTDm QV Q2 2009 rosso
Alfa Giulietta Sprint 1.4 TCT 2016 rosso
*driving Alfa Romeo since 1975

Originally Posted by Jeremy Clarkson
A turbo: exhaust gasses go into the turbocharger and spin it, witchcraft happens and you go faster.
Plaats reactie
157 berichten